American Kratom Association Tr
This topic has been deleted. Only users with topic management privileges can see it. The American Kratom Association (AKA) has launched the truth in labeling program, which aims to stomp out impermissible health claims in the Kratom industry, and rid the market of adulterated and contaminated products, in order to protect Kratom’s legality.

This is bad for the industry, since if enough of this activity happens, where Kratom is being marketed as a drug, then the FDA will have stronger evidence to ban Kratom.

Further, it is bad for individual vendors to claim that Kratom has health benefits, since such claims could land them in prison for drug trafficking. Indeed, in May 2019 a Kratom vendor was arrested due to making health claims about his Kratom products, and he ended up losing all of his money and was sent to prison.

Beyond this, the AKA truth in labeling program will stomp out mislabeled Kratom products. Essentially, many vendors are cutting corners on lab testing in order to save money, and this can lead to adulterated or contaminated Kratom reaching the market. In the past this has led to a Kratom related Salmonella outbreak, which really gave the FDA a lot of fuel for banning Kratom. These contaminated Kratom incidents need to be avoided in order for Kratom to remain legal, and the only way to avoid it is with proper lab testing.

Further, there are perhaps even some vendors who are purposely adulterating Kratom products with addictive synthetic opioids, like the Krypton incident where Kratom products were laced with O-desmethyltramadol, which can lead to a heavy addiction and possibly overdoses. These incidents need to be stopped in order for Kratom to remain legal, and the only way to stop this is via vendors proving that they have a strong lab testing program.

Zooming out, safe and pure Kratom that is properly marketed poses no threat to the public and the industry, and the truth in labeling program aims to make this the industry standard, so that there are no more incidents of contaminated, adulterated, or mis-marketed Kratom products.

In order to enforce the truth in labeling the program, the AKA has a form at this link where consumers can report misbranded, contaminated, or adulterated products, and the AKA will investigate any reports, and then send them to the FDA if it is found that a vendor is making impermissible health claims or not performing proper lab testing.

Ultimately, it is clear how the truth in labeling program will protect Kratom’s legality, and every Kratom Warrior can do their part to enforce this program and help keep Kratom legal. 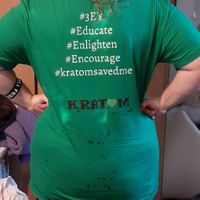 the idea of the truth in labeling Act is positive and it adds reinforcements to the community and to Consumers. We want nothing more than to provide safe and healthy Kratom to the community and to anyone who's doctor has dropped them as a patients no one deserves that. Our issue it's obviously they teamed up with the FDA who has been against us since day one they've been trying to shut us down for day one so I want to know when they decided and working with the FDA was a good thing was a positive step. Other than that I'm all for the truth in labeling Act

@Monnie-Fuq-LaVenus I think it really pushes out the little guy and makes it harder for start ups to operate. Especially when they are openly promoting specific multi-million dollar vendors who donate Thousands if not more per month to the AKA. OPMS and other big name head shop brands.  ON THE HOME PAGE! Plus when did the AKA become a regulatory agency?

it seems like they have I guess I picked the the biggest names in the business to promote this new step. There are a great many people in this community are very distrustful of the FDA and for good reason. Every time we around the FDA is coming out with another bashing campaign against our leaf and no matter how hard we try it doesn't seem to matter how positive our experiences are. I'm willing to work with people who want to promote safe product but we cannot trust the FDA it's a simple as that

there was a guy once about a year ago there came out claiming that his Kratom was the best opiate in the business. I ripped him a new one and then certain people in that Community told me I went too hard on this person and that I needed to approach them with kid gloves I said no screw that. The more people make claims like that, the worse it looks on us.

@Monnie-Fuq-LaVenus idk why people make such claims. Especially if they are vendor. 1 it is missinformed. 2. it is dangerous 3. opens you up to litigation or possible jail. 4. its not how kratom should be marketed. I agree, that sometimes you just need to bring it to there attention that is not ok. I have spoken with a couple of vendors ( i will not mention) that have questionable materials and a few listen and some choose to keep doing what they are doing. Some people you just can't change. :/

yeah I still have the chat room dialogue still saved somewhere but it really ticked me off the way so many people just blew it off like it's just the way he markets his kratom. That is wrong irresponsible and extremely dangerous not that kind of stuff I could understand reporting to the FDA but even then you're giving them more ammunition